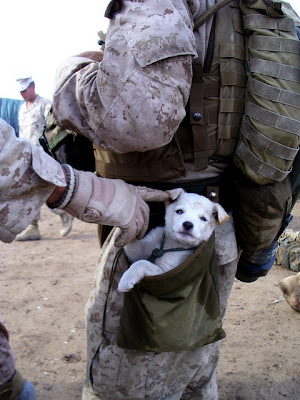 Marines love Dogs. The USMC are the best fighting force devised by man but most of them have a real soft spot when it comes to our 4 legged friends.

Case in point - A small puppy wandered up to U.S. Marines from Alpha Company, 1st Battalion 6th Marines, in Marjah, Afghanistan. After following the Marines numerous miles, a soft hearted Marine picked the puppy up and carried the puppy in his drop pouch.

I can understand and while it is against regulations for the Marine to have the puppy, Command turns a blind eye to this as at places like Marjah, having a dog there provides both security and something to give the Marines a touch of home.

Caring for a small pup gives each Marine in that Battalion something to warm their heart. To see the caring this pup will get shows that our Marines care for those who need them the most.

Semper Fidos to the U.S. Marines from Alpha Company, 1st Battalion 6th Marines, in Marjah, Afghanistan. Take care of that pup.
Posted by Middleboro Jones at 6:46 AM

That reminds me of my deployment as a Marine fobbit. At Leatherneck they occasionally had stray cats roaming around. We noticed one near our tent, and finally figured out he was living in the wooden pallets that we set our tents on. It took a lot of feeding and patience, but we finally got him to trust us and he became our open secret of a mascot. What's even better is even though we were at double capacity we never had a vermin problem!

i wonder what has happen to the pup since then.

About US Navy Jeep

US NAVY JEEP is a blog dedicated to presenting and promoting information that represents the USA & our fine Military, especially the US Navy & USMC. This also includes being candid and expressing opinions about issues and concerns that effect all of us in the areas of politics, defense and the domestic affairs of our country. This blog has no affiliation with the US Navy or United States Government.

Along the way, I will also enclose info about Classic Cars, Warbirds and other topics of interest...I like to keep it interesting.

I decided to feature the venerable US Navy Jeep because while the ground-pounders in the Army like to think it is exclusively theirs, the Jeep did a helluva lot of duty in the Navy and ferried Seabees/Marines across many miles and beaches fought for an inch at a time. I have also restored my own 1963 Willys Jeep and rededicated her as a Navy Jeep with correct paint scheme and lettering. She is a great old Jeep and I get lots of compliments on her.

As a retired combat Veteran, I find that my ideals have not changed much since retiring and I find the words below to be some of the best ones to express how I feel about a life-long dedication to the US Navy's values of Honor, Courage & Committment.

I am a United States Sailor.

I will support and defend the Constitution of the United States of America and I will obey the orders of those appointed over me.

I represent the fighting spirit of the Navy and all who have gone before me to defend freedom and democracy around the world.

I proudly serve my country’s Navy combat team with Honor, Courage and Commitment.

I am committed to excellence and the fair treatment of all.

"We ask no favours of the enemy. We seek from them no compunction. On the contrary, if tonight our people were asked to cast their vote whether a convention should be entered into to stop the bombing of cities, the overwhelming majority would cry, "No, we will mete out to them the measure, and more than the measure, that they have meted out to us."

The people with one voice would say: "You have committed every crime under the sun. Where you have been the least resisted there you have been the most brutal. It was you who began the indiscriminate bombing. We will have no truce or parley with you, or the grisly gang who work your wicked will. You do your worst - and we will do our best."

" You go into Afghanistan, you got guys who slap women around for five years because they didn't wear a veil. You know, guys like that ain't got no manhood left anyway. So it's a hell of a lot of fun to shoot them. Actually it's quite fun to fight them, you know. It's a hell of a hoot. "

But I do ask every publisher, every editor, and every newsman in the nation to reexamine his own standards, and to recognize the nature of our country's peril. In time of war, the government and the press have customarily joined in an effort, based largely on self-discipline, to prevent unauthorized disclosures to the enemy. In times of "clear and present danger," the courts have held that even the privileged rights of the First Amendment must yield to the public's need for national security.

Today no war has been declared, and however fierce the struggle may be, it may never be declared in the traditional fashion. Our way of life is under attack. Those who make themselves our enemy are advancing around the globe. The survival of our friends is in danger. And yet no war has been declared, no borders have been crossed by marching troops, no missiles have been fired.

If the press is awaiting a declaration of war before it imposes the self-discipline of combat conditions, then I can only say that no war ever posed a greater threat to our security. If you are awaiting a finding of "clear and present danger," then I can only say that the danger has never been more clear and its presence has never been more imminent.

I have no intention of establishing a new Office of War Information to govern the flow of news. I am not suggesting any new forms of censorship or new types of security classifications. I have no easy answer to the dilemma that I have posed, and would not seek to impose it if I had one. But I am asking the members of the newspaper profession and the industry in this country to reexamine their own responsibilities, to consider the degree and the nature of the present danger, and to heed the duty of self-restraint which that danger imposes upon us all.

Every newspaper now asks itself, with respect to every story: "Is it news?" All I suggest is that you add the question: "Is it in the interest of national security?"


Col. Jessep: Son, we live in a world that has walls and those walls need to be guarded by men with guns. Who's gonna do it? You? You, Lieutenant Weinberg? I have a greater responsibility than you can possibly fathom. You weep for Santiago and curse the Marines; you have that luxury. You have the luxury of not knowing what I know: that Santiago's death, while tragic, probably saved lives and that my existence, while grotesque and incomprehensible to you, saves lives.

You don't want the truth because deep down in places you don't talk about at parties you want me on that wall, you need me on that wall. We use words like honor, code, loyalty. We use them as the backbone of a life trying to defend something. You use them as a punchline.

I have neither the time nor the inclination to explain myself to a man who rises and sleeps under the blanket of the very freedom I provide and then questions the manner in which I provide it. I would rather you just said "thank you," and went on your way. Otherwise, I suggest that you pick up a weapon and stand a post. Either way, I don't give a damn what you think you are entitled to..." (From A Few Good Men)

Middleboro Jones
I'm a Human Resources professional with 25+ years of management experience with companies from the defense support services, healthcare, manufacturing, transportation, & human service sectors. I have a Bachelor’s Degree in Business Administration from Eastern Nazarene College. I'm a retired US Navy Combat Veteran and held the rank of Petty Officer 1st Class in the United States Naval Reserve. My awards include Meritorious Unit Commendations, Navy Unit Commendation Medal, 3 Naval Reserve Meritorious Service Medals, a National Defense Service Medal, 2 Navy & Marine Corps Overseas Service Medals, Iraq Campaign Medal and designation as an Expert Marksman with the 9 mm pistol & M-16 Rifle. I was a member of the crew on the USS CONSTITUTION in 1997 when she went under sail for the 1st time in 116 years. I have served on active duty with the US Navy in Iraq, Kuwait, Egypt, The UAE, Bahrain, Pearl Harbor Hawaii, Navy Base New Orleans LA, Newport RI, Port Hueneme CA, Cheatem Annex VA and Tampa FL.